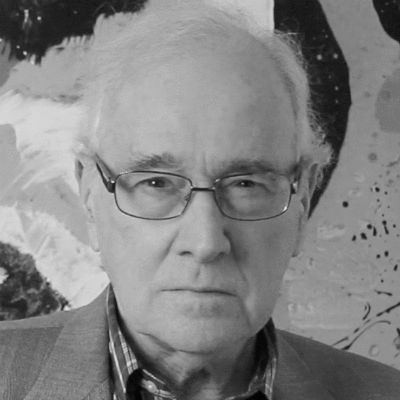 Looking at Rainer Lagemann’s Discus Thrower—Sean, 2010, I immediately associated to Myron’s Discobolus, ca. 450 B.C.E., its classical ancestor.  Myron’s nude figure is famous for its muscular idealism, its poised intensity, and mimetic perfection.  Like Myron’s sculpture, Lagemann’s sculpture depicts the heroic athlete at the moment he is ready to hurl the discus—the “stop action” moment of maximum tension, his body a sort of tightly wound spring about to forcefully release the small discus into the seemingly infinite space beyond it.  In Lagemann’s sculpture, the discus thrower’s right arm also extends far back, ready to move forward—but he holds no discus, and seems suspended in space, indeed, formed by it, as the stainless steel lattice that is his body suggests.  Myron’s work is opaque and material—it exists in a Roman marble copy of the bronze original—while Lagemann’s is transparent and all but immaterial.  Myron’s figure is down to earth—his body is supported by a sort of stump that grows out of it, suggesting that he cannot move freely in space however free he is to move his limbs (the stump is technically necessary to keep the figure upright, but it also confirms that his body and strength are gifts of nature)—while Lagemann’s figure is peculiarly “unnatural.”
Lagemann has in effect “spiritualized” the discus thrower by letting us see through him, as it were, more particularly by turning him into an abstract construction of modular squares, each a sort of firefly in the otherwise overwhelming darkness.  Lagemann has turned Myron’s epic, sturdy figure into a supple, lyric figure—a free-flowing grid, as flexible as the body, and contouring it, rather than a fixed form, frozen into rigid if dramatic immobility, like Myron’s figure--even more uncannily “moving,” not to say more “soulful.”
Again and again we see Lagemann modernizing the full-bodied, vitally alive classical-type nude by turning its body into an abstract construction, each square module a muscular tissue, woven together to form its skin.  Even as he disembodies it he maintains its integrity and conveys its vitality, for the modules pulse with energy, as their flickering brightness indicates.  Sometimes he seems to appropriate a classical model directly, even as he modifies it—the naked figure in Believe in Yourself, 2012 seems to be based on the Lapith in the Lapith and Centaur metope from the Parthenon, ca. 438-432 B.C.E., only now seen from behind rather than from the front, and the armless and legless torso in Back-Alex, 2007 could easily be the archaic torso that Rilke famously reflected on in one of his poems—but the larger point is that he seems to be suggesting the interchangeability and inseparability, or at least ambiguous relationship, of representation and abstraction.Fallen Heroine Fl-Tahirah, 2012 is another archaic torso—an archaic construction, for its golden squares have the precious quality of archaic sculptures of the gods and goddesses.  Abstract the Muse—Fernanda, 2011 makes the point directly:  Lagemann’s muse is abstraction, but has to take human form to be felt.  Cross-Pablo, 2012 seems the Christian exception to the Classical rule, but then Pablo’s outstretched, headless body is classical in its  proportions.  It floats in space, like an Icarus waiting to fall, yet held up by the grace of light, transubstantiating it into pure spirit.
Lagemann titles his sculptures with the first names of his models, suggesting they are all personal friends.  For all their abstractness, they are peculiarly intimate.  At the same time, seen in the darkness, they seem like distant memories, defined by their structure yet inherently indefinite.  Their bodies and poses may be different, but they are all composed of the same “indifferent” geometrical materials, suggesting Lagemann’s detachment from them, and making them seem anonymous.  The fact that their bodies are perfect suggests that they are all variations of the same enigmatically ideal body—more noumenal than phenomenal, as it were, and suggesting that Lagemann is a Neoplatonist mystic.  His obsessive concern with the form of the figure may finally have to do more with his interest in pure form—symbolized by geometry—than with his interest in the human body
He shows it in all its flexibility—many of the figures seem to be dancers—but it may be the dynamics of the flexibility that fascinates.  Whether at rest or in motion, Lagemann seems to test its limits.
Lagemann’s art is a kind of homage to classical art under the guise of modernist purity.  The classical figure, a “sound mind in a sound body,” is alive and well in Lagemann’s constructed figures.  However ghostly—shades in Hades, as it were—they may be, their spirit informs his simple geometry, animating it with their intensity.  The radiance of the geometry is an expression of their inner light, even as it sanctifies them.  Lagemann’s figures humanize geometry, even as geometry eternalizes them.  They may be mirages, but they fill the void with their presence.

Donald Kuspit is Distinguished Professor Emeritus of Art History and Philosophy at SUNY Stony Brook. His latest book is “ Critical History of Modern Art” (Artnet ebook).  He is a contributing editor at Artforum and Percontra, the author of 20 books, numerous articles, exhibition reviews and catalogue essays, curated some 40 exhibitions, and served on the Dokumenta Committee for three terms. He has received fellowships from the Ford Foundation, the Guggenheim Foundation, the NEA, the NEH, and the Asian Cultural Foundation, among other organizations, and also five honorary doctorates.